Last week we looked at the head from the front. This time we are going to consider the profile view.  Four years ago I ran a short course called ” Eyes, Ears, Nose, Mouth, Face” in which we explored facial features each week, alone, and in context with the rest of the head.  For the last week we had a delightful model called Lea but for the first four weeks our models were each other.  The students kindly gave permission for me to photograph their work and publish on my blog or social media pages.  The drawings of Lea and Colin below, are among my favourites for their observation of the models and for their very different drawing styles. 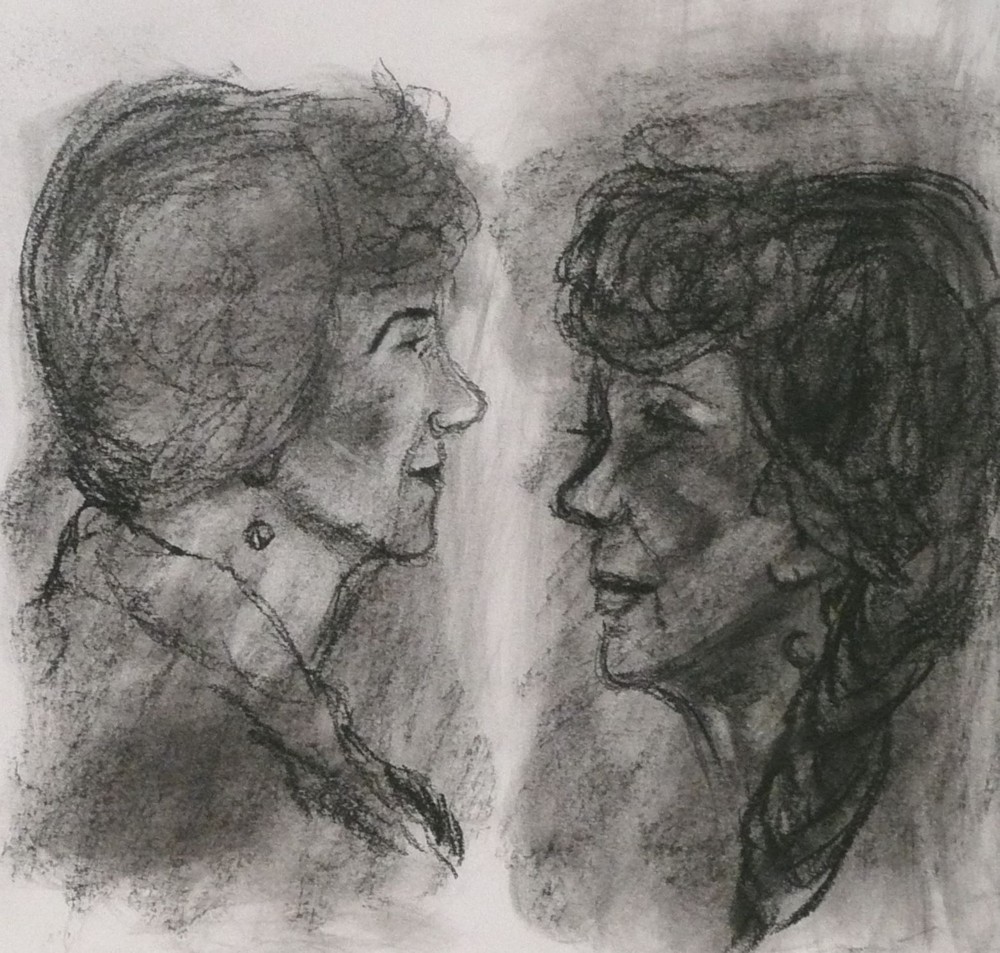 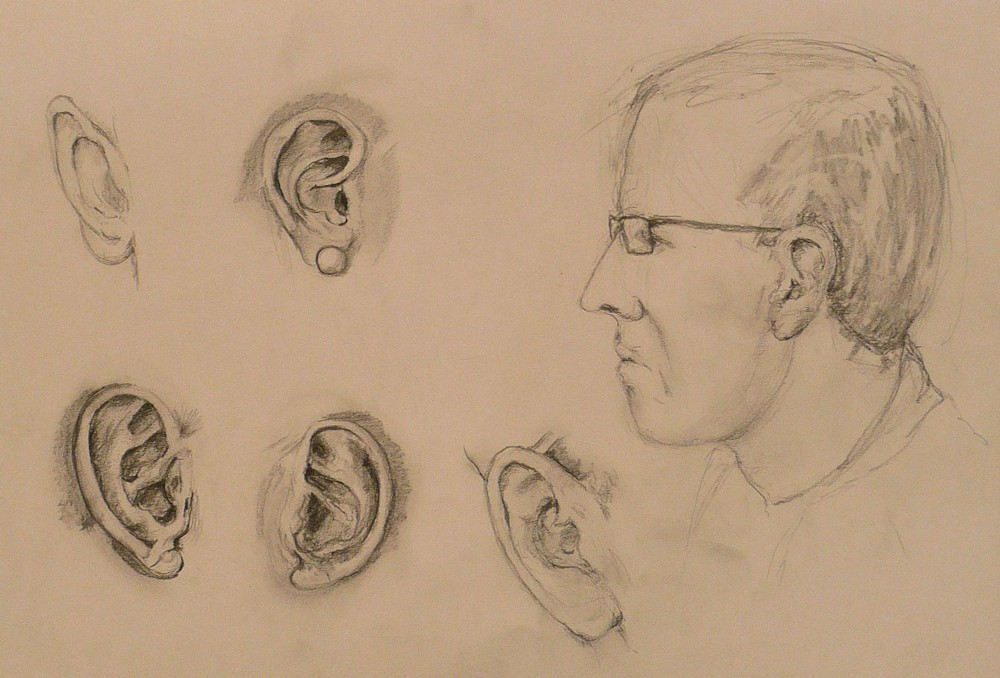 Below is what I can only call a photo-fit of a fictional face but note just as the eyes are about half way down the head in front view the same applies to the profile view.  All the features and the shape of the forehead are revealed in the profile view including the ear which may be seen totally or obscured by hair.  Often when someone turns sideways we are surprised to find a nose that is a very different shape to what was imagined from the front.  The information in profile view is quite different, lacking wholly the other eye and the other side of the face.  It is why the most informative view and that which is perhaps most popular among portrait artists is the three quarter view because partial information about the face in profile and full face is combined, but more about that in two weeks time. 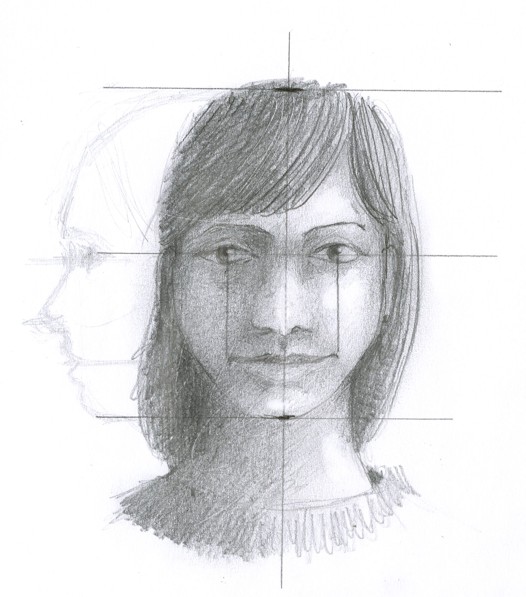 Here are a few suggestions for this week’s challenge.

Try finding some photos, preferably of someone you know in profile view, and spend a while just looking before drawing, better still if you have someone at home willing to sit for you. Look especially at the shape of the whole head and the placement of the ear.  It may be further back than you might have thought.  Look also at the relation of the line of the jaw to the ear. See how different the eye looks in this view.  Look at the angles and shape of the nose and its relation to the eye socket and upper jaw.

When you start to draw sketch the largest shapes first and loosely enough so that you can refine the shapes as you work, always bearing in mind the relationship of the shapes to each other.  Start to block in tones as you go, lightly at first and as your drawing becomes better defined work on the tones making them communicate the forms more strongly.  Think about the underlying shape of the skull before adding the masses of hair. 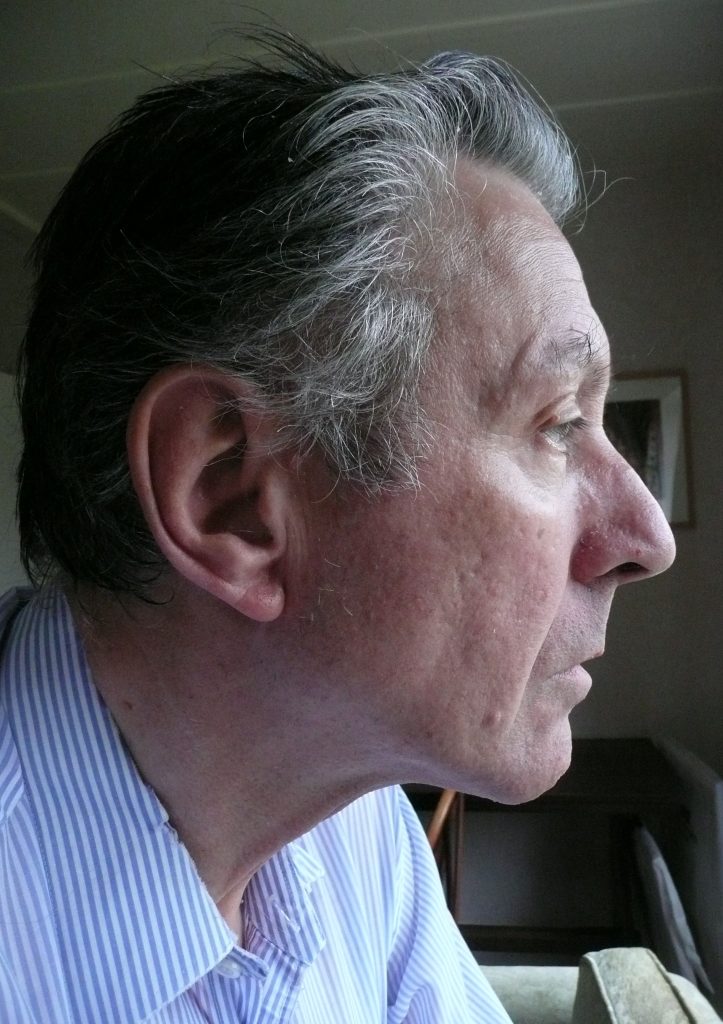 This first drawing will have made you question.  Next try drawing from life or from photographic reference the eye or both eyes, the nose and the mouth in full face and profile views.  Also practice drawing several ears.  You may like to try making a silhouette head and placing the ear.

When you have tried some of these exercises make a painting of a of a head in profile.  If you prefer to continue drawing perhaps try making two further drawings one of a child and one of an older person in profile.  What differences do you notice and how do they affect the way you draw? 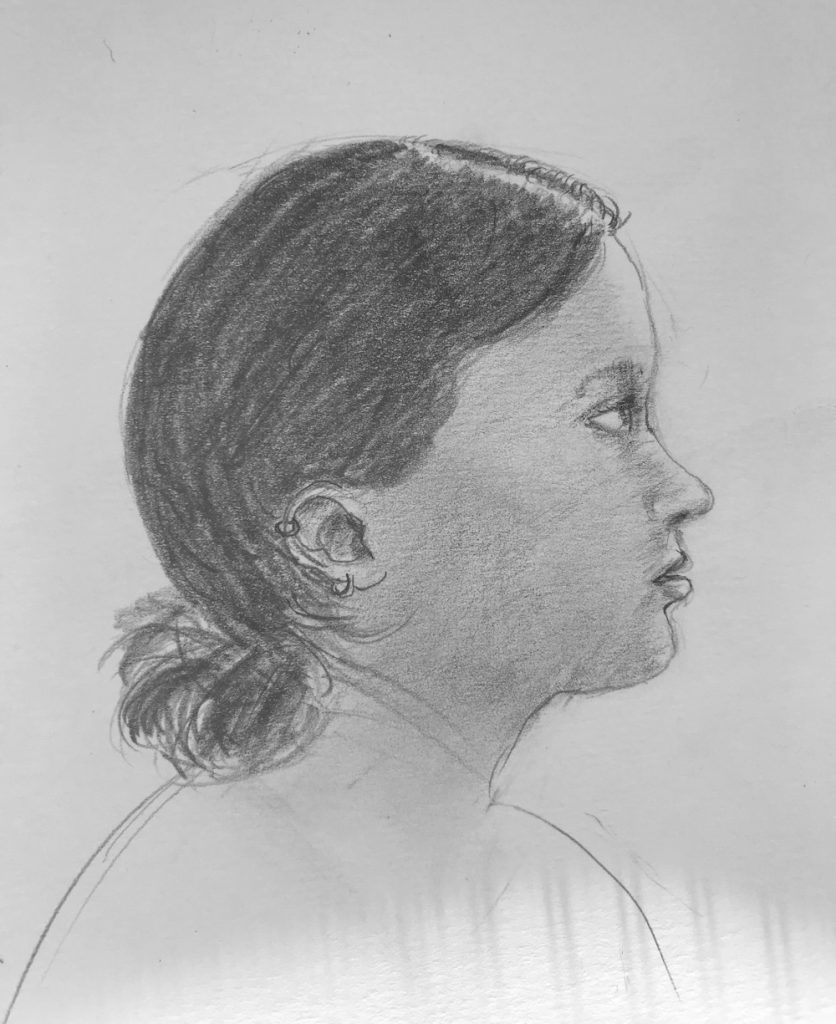 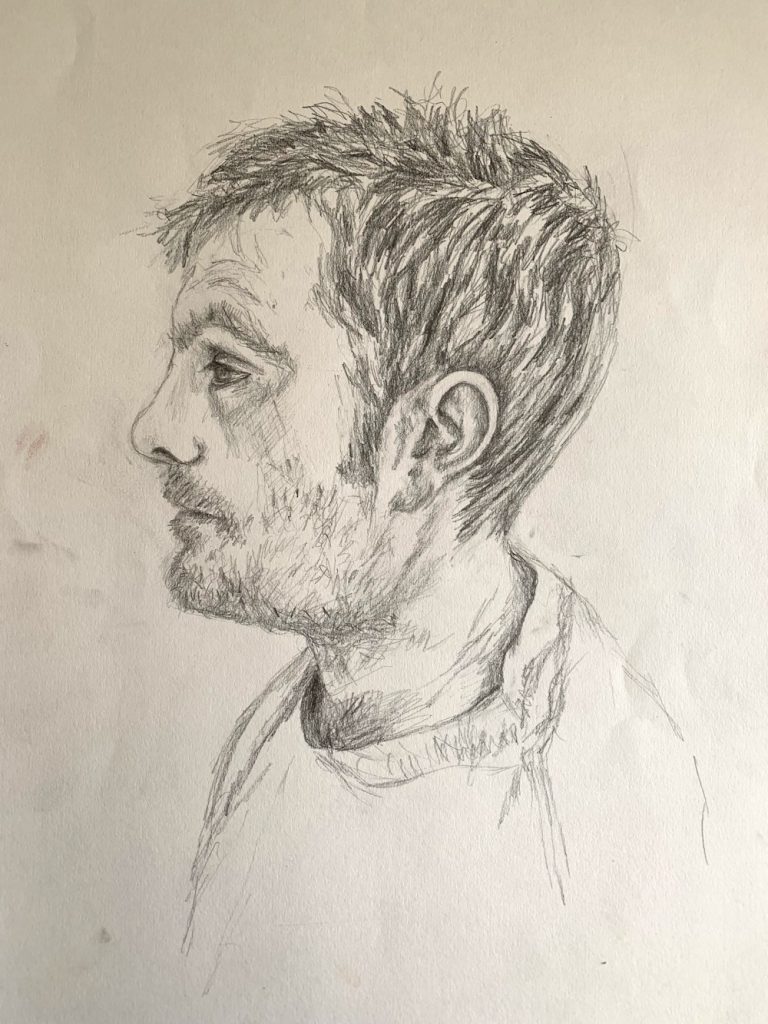 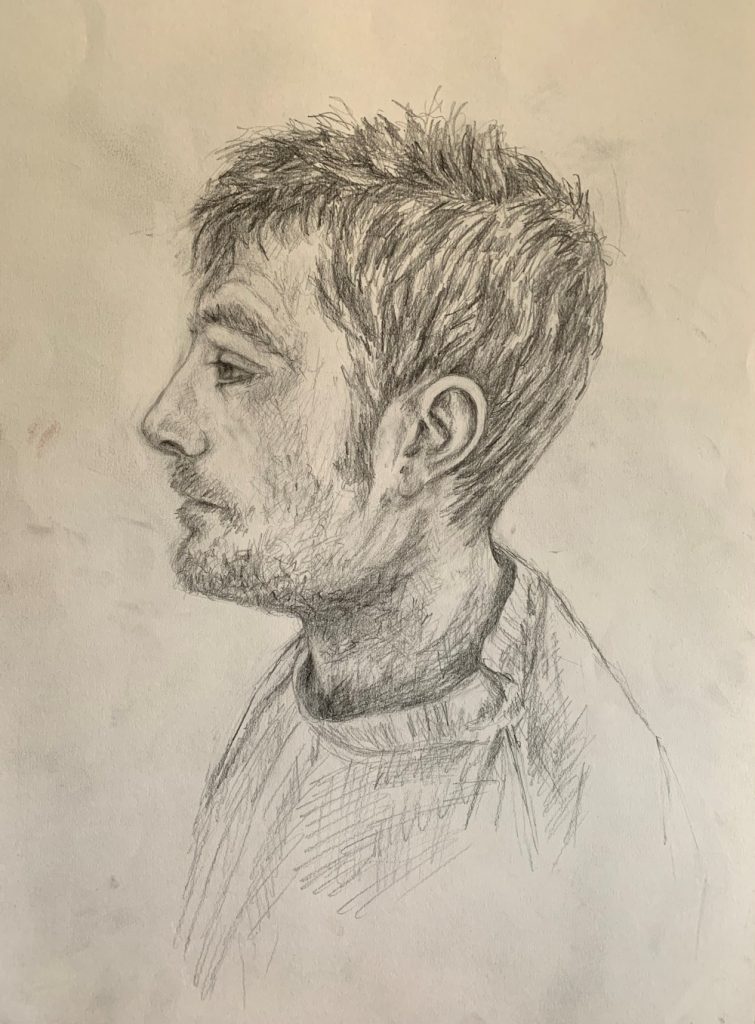 Richard: Jan has developed and reworked some areas of this drawing 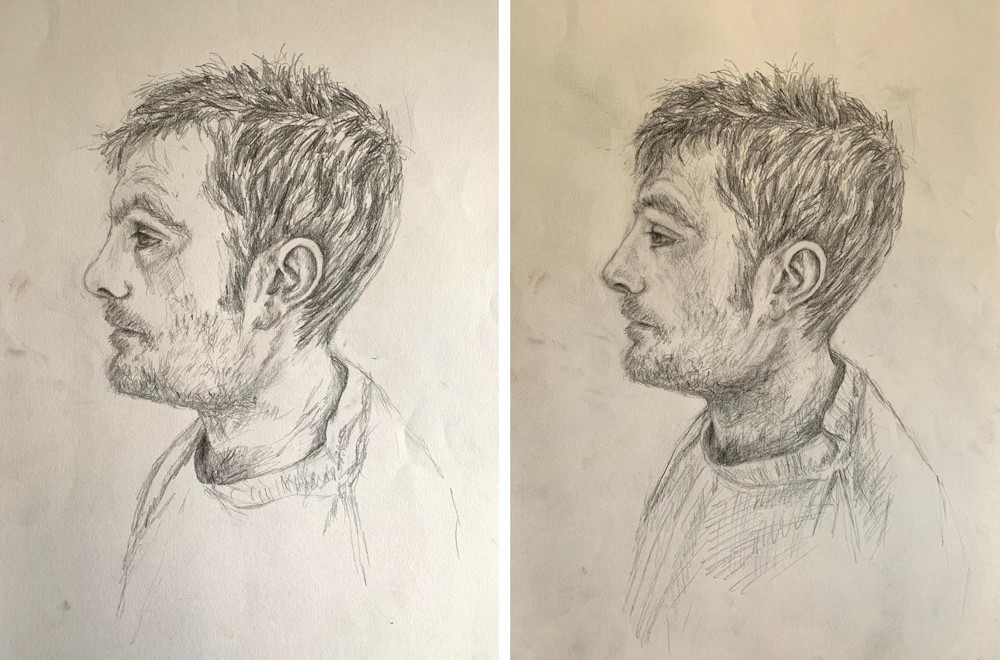 Jan’s drawing of Richard at both stages for comparison 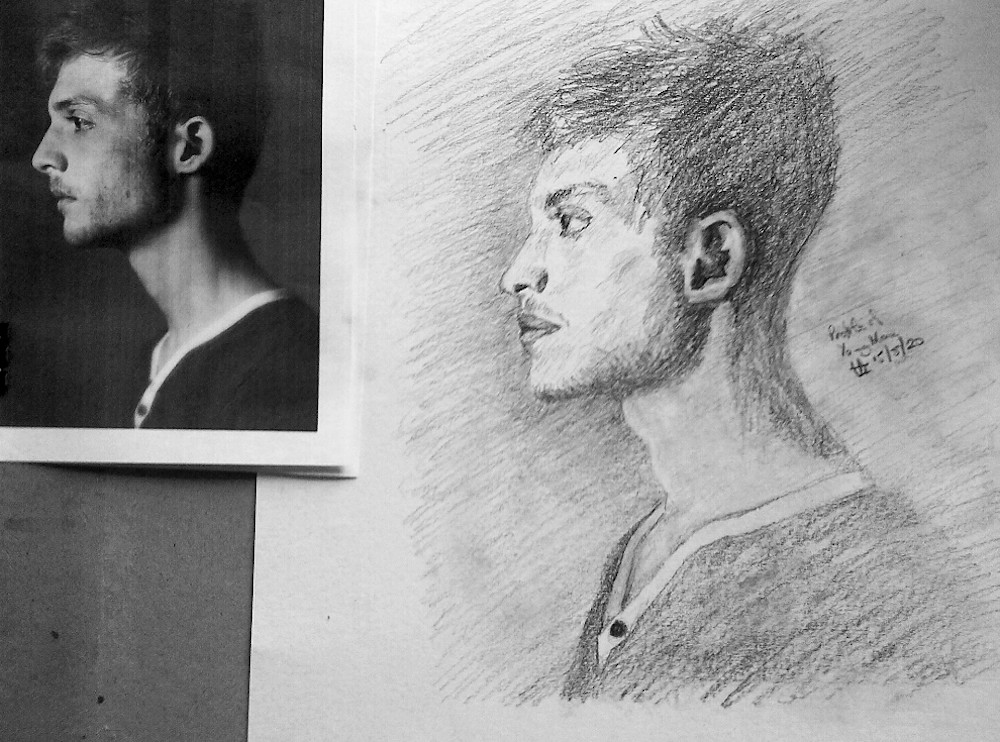 Young Man by Angela with reference

Angela’s reference was in colour but I converted to gray scale so that everyone can see the tones in the reference.  I would love to see another drawing or painting where the tones were as in the reference.  When painting tonally the shapes of the back of the neck and hair are “lost”; the similarities in tone merge the head into the background. Another important lost edge in this reference occurs under the chin.  These very soft almost indiscernible edges contrast with the sharply defined edges of the young man’s brow, nose, chin and front of the young man’s neck.  In drawing it is good to be aware of all the structures and edges and then to think about the lost edges that will help the portrait to sit within the volume that the work is depicting.  If too much emphasis is placed on delineating all the edges with sharp difference in tone between the background and the model, the artist risks the model appearing as a cut out on top of rather than part of the work.  The drawing here is helped by the texture of the hair which softens the tonal differences with  the background and also the well observed shadow in Angela’s drawing, under the chin.  Love Angela’s handling of the hair!

Drawings by Vivienne and Roger 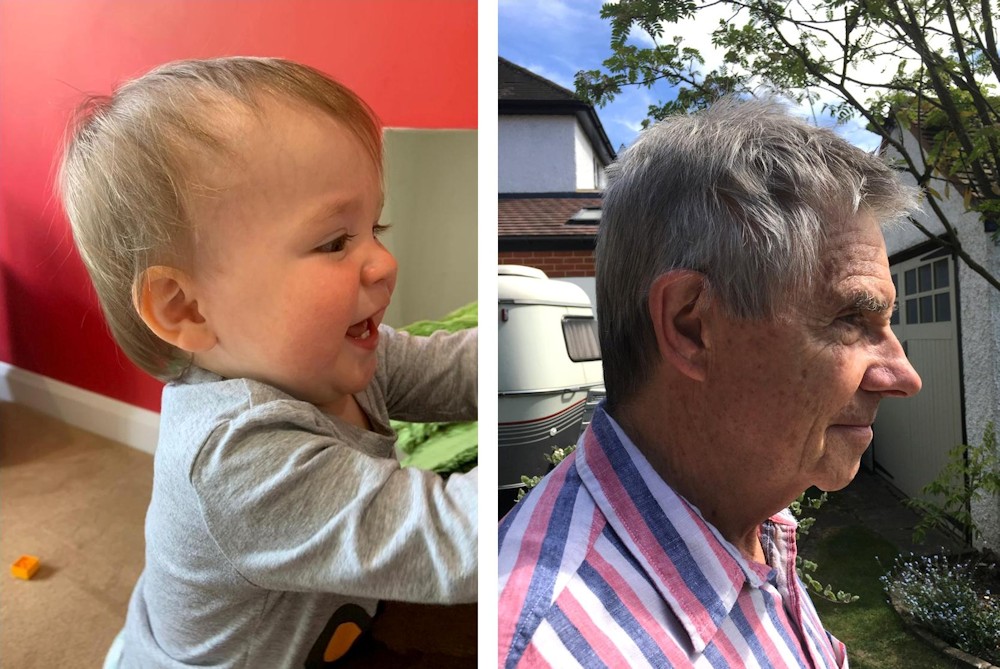 Archie and Chris photos by Heather 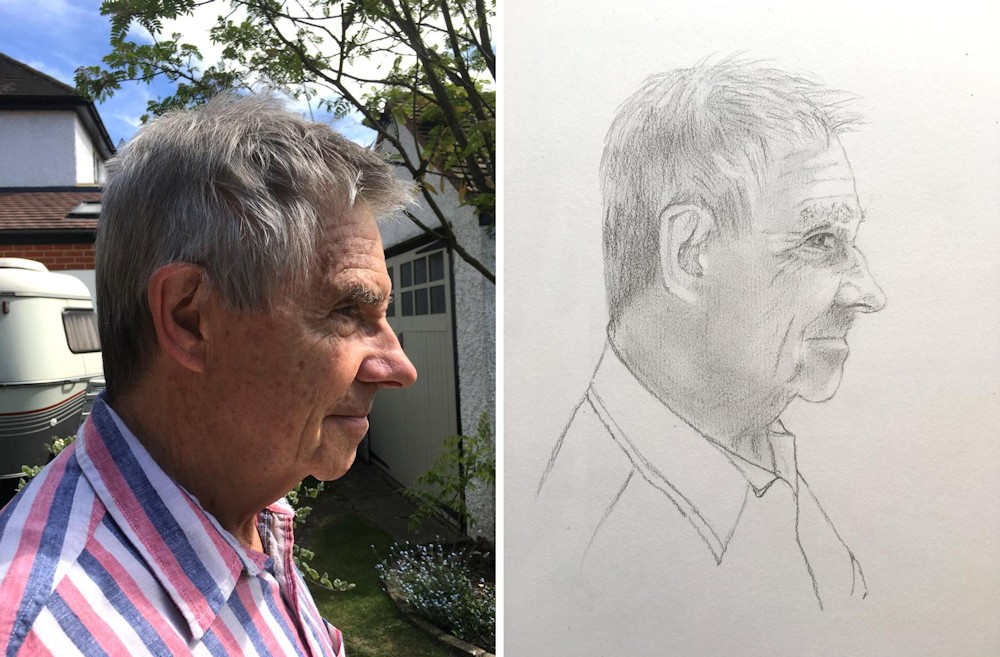 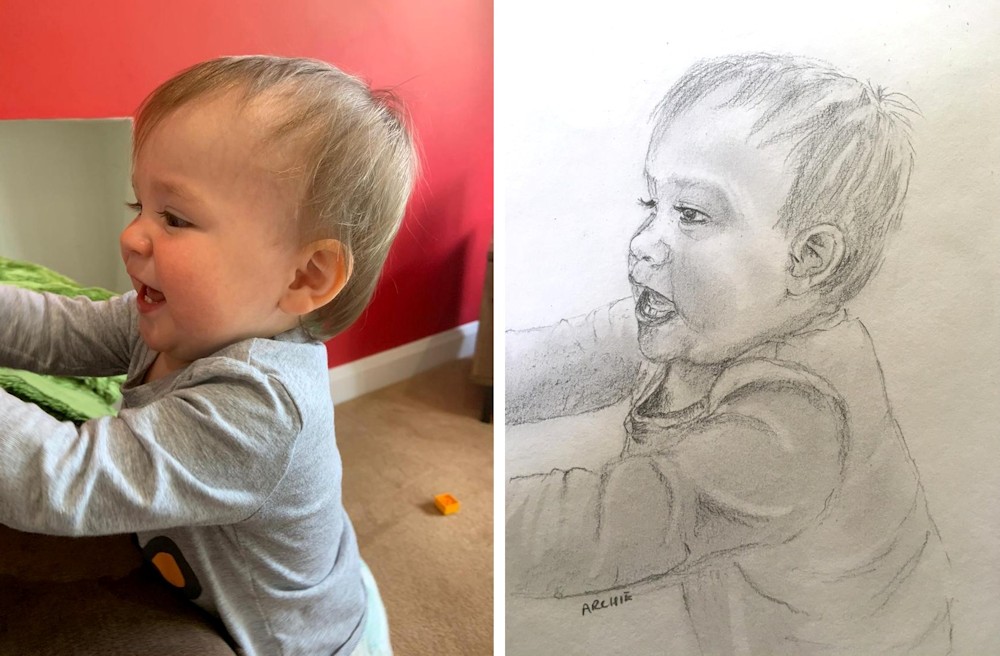 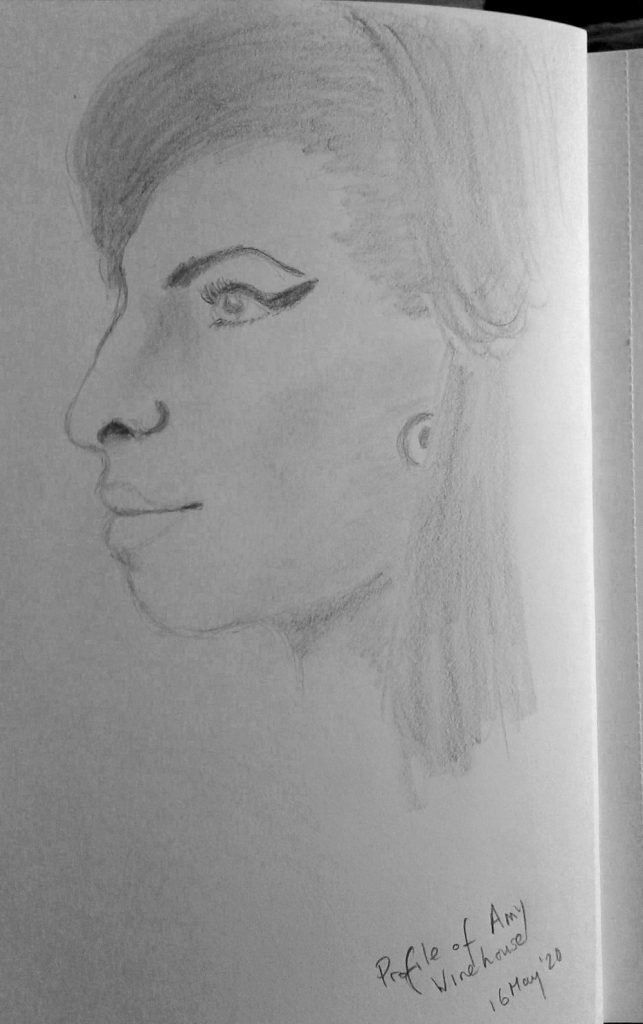 Category: Art Challenges: Ideas to try, Uncategorised
Previous: In the Garden: garden tools and features Next: Paint a Flower in watercolour: wet in wet or wet on dry?

Into the Garden: Watercolour and coloured pencil
Wednesdays 12th May to 16th June