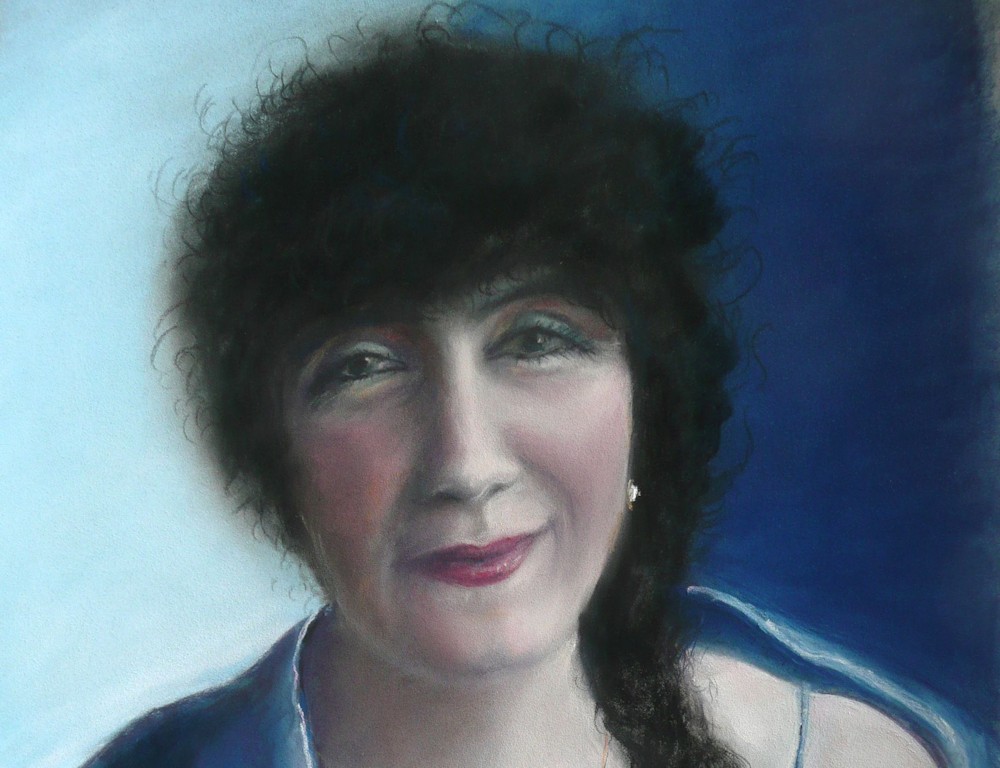 I have been asked to present a portrait challenge so I’m going to do three but every other week so that in between we’ll concentrate on the outside world of gardens, flowers and lawnmowers!  We’ll be considering full front, profile and three quarter views and if you get really hooked the back of the head, though that may get left till I write a post on hair.

When you set about drawing a portrait head there are several considerations;

How much of the sitter to include apart from the head?

Even if the head is viewed full front is the sitter’s body also facing front or is the neck slightly turned?

Which direction does the main light come from?

Lit from the side the contrast between one side of the face and the other may be dramatic.

How do the features sit within the general form of the head and what is their spatial relationship with each other?

What measurements should I make to help construct a framework to build a convincing drawing?

Then the most important question:

What is it about the sitter I want to communicate and what will be the mood of the drawing?

Below are three very different portraits made for different reasons and from different kinds of reference; 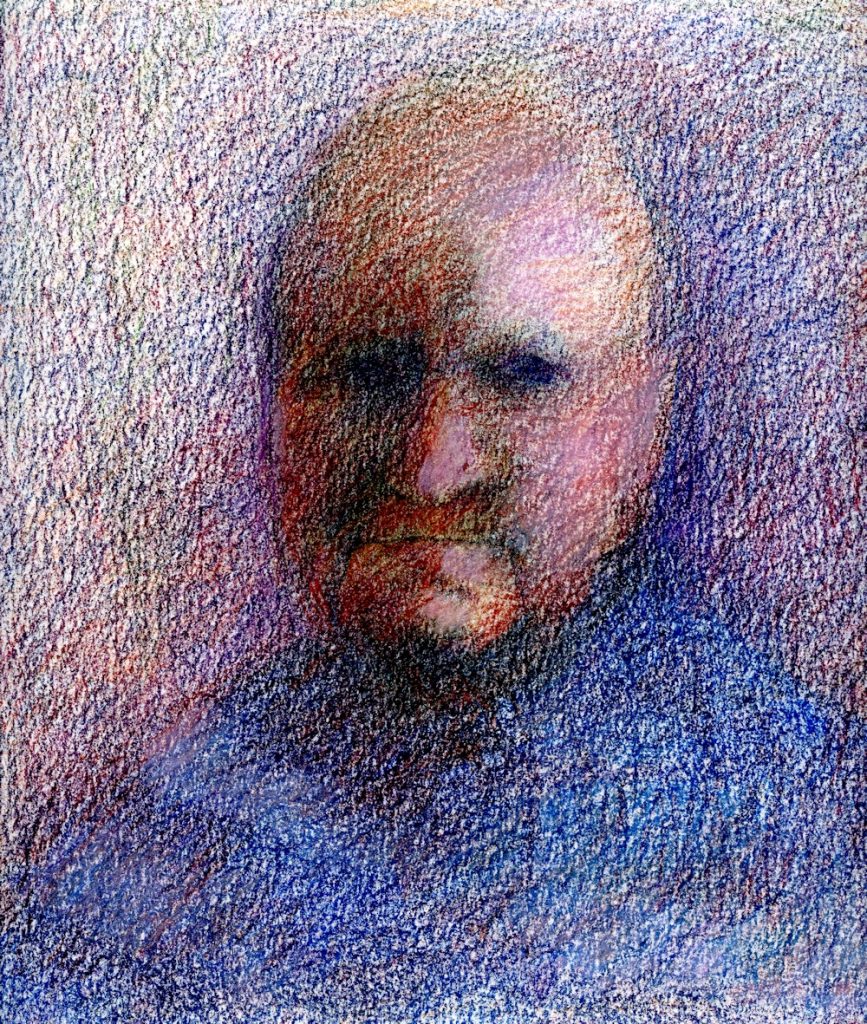 This small portrait in scribbled pastel pencil began as a thumbnail sketch of a convicted criminal in a Russian Jail.  I didn’t visit; he was featured in a television documentary.  There was no time for detail, just an atmospheric drawing of a person possibly with much to hide but with a grim determination to carry on in harsh conditions. He is tight lipped and his eyes though open are scarcely defined.

He is looking straight at and through us, his face strongly lit from one side.  The eyes are vertically in the middle point between the base of his chin and the top of his head and about one eye’s width apart.  These measurements are approximations for when the head is turned fully towards us and this is true for nearly all heads, human heads, that is!  In case the head is tilted a little it can be useful to make a feint line through the axis of the head before you start on drawing the features.  I usually start by getting an idea of the overall shape of the head, sometimes measuring its overall width and height. I then indicate the neck and shoulders. After that I usually tackle placing the features,  The eyes are usually in shadow so before marking out the detail I may work a pale layer of tone over the eye socket area.

Many people place the features with line, again usually starting with the eyes. Take care to look at the length of the nose, it is easy to make the nose too long.  One famous artist quote is that ‘ the nostril is always nearer the eye than you think!’ Also the relation between the base of the nose and the upper lip and the lower lip to the base of the chin.  Can you see the ears? 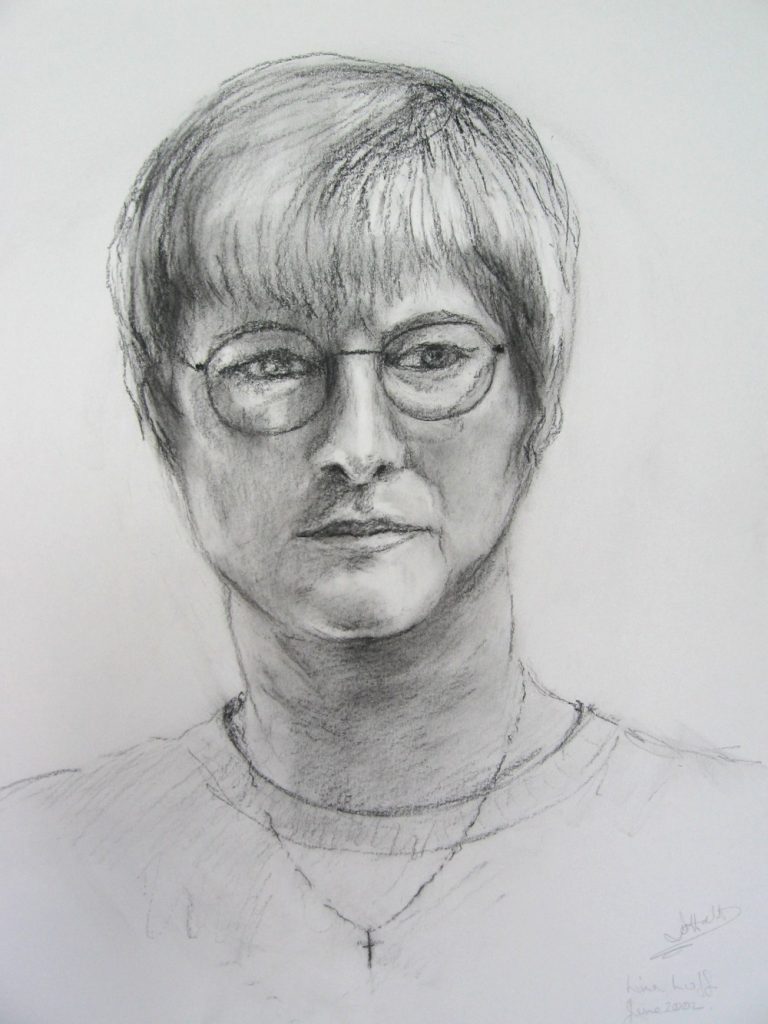 Place them and the mass of the hair if there is any!  Then work tonally to describe the form of the head and ts features, adding any detail you feel is necessary.  Look to see where areas of shadow are on your model or reference, especially under the nose, the upper lip, under the chin, the eye sockets and  under the hair line.When you go back to working further on the hair it may be good to show the flow of the hair with line work in places but it can look laboured if you try to draw every individual hair. This is especially so if the tonal mass of the hair has already been well indicated.  In the portrait of Lea below I scumbled masses of dark pastel so the hair became a texture. Always be guided by what you observe and use the appropriate technique.  Explore line and texture on a separate paper, imagining the kind of hair you wish to depict.

For your first drawings use charcoal or pencil, about an A3 or larger sheet for charcoal and a much smaller sheet for pencil studies.  You may like to make several quite small sketches in pencil, from different people or photos till you get used to describing various head shapes and features so that you become confident to tackle a more considered portrait. 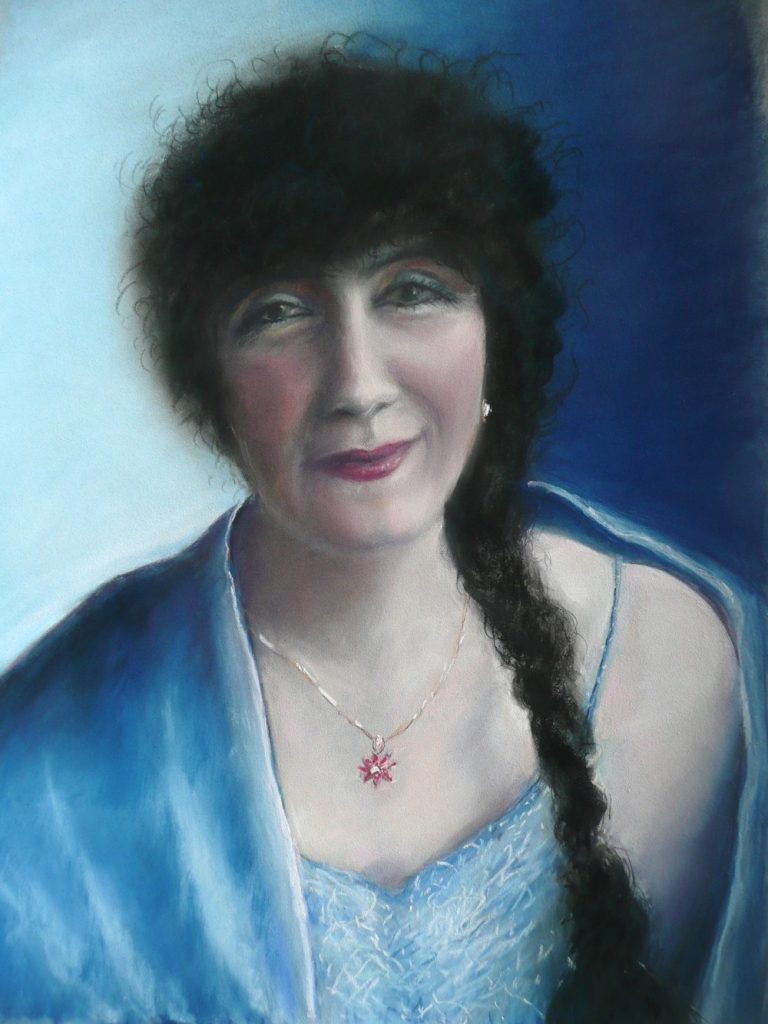 Lea: pastel from sketches made from life and a photographic reference

Tackle a portrait of someone you know, perhaps a family member either from life or from a photograph.  Try to draw directly or scale up your reference by using a grid.  Use a grid just to place the main features then draw everything with as free and fluent a hand as you can.  But please do not trace your image as it may become wooden and not have your own personality in the line.  The way we draw is as unique as our signature.

For the portrait of Lea I decided to include her cape and the top of her dress to show off her beautifully braided black hair.

Just wish you could hear her sing!

If you have not tackled a head before don’t worry about likeness just go for making a convincing head!

Your drawings and paintings; 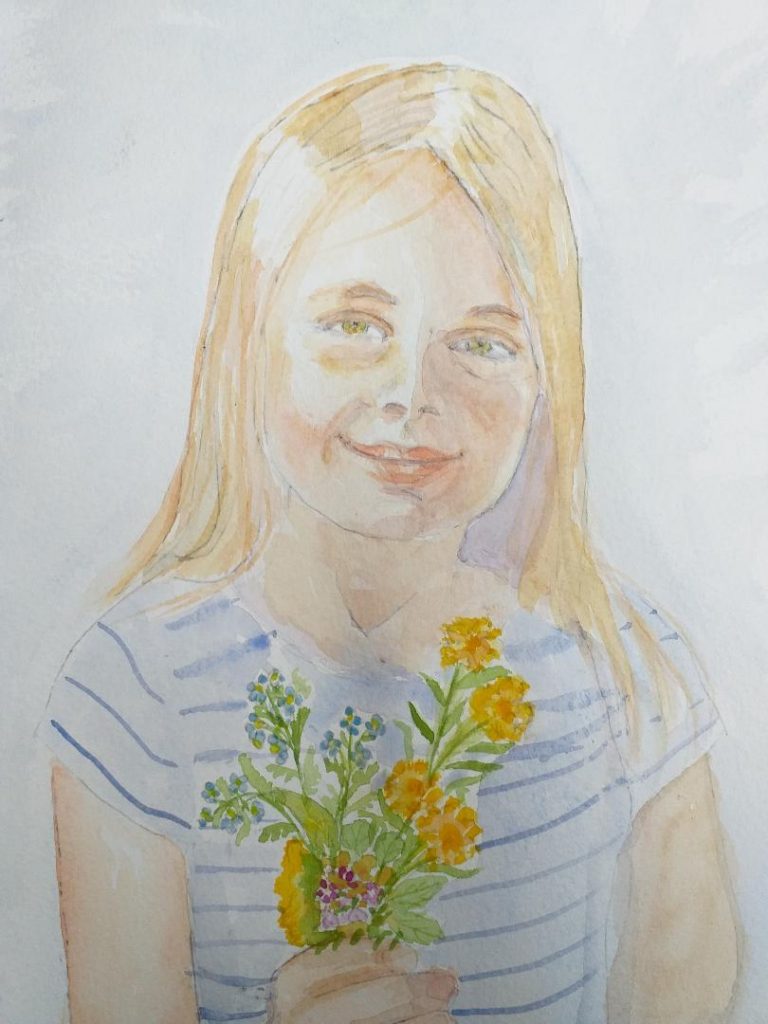 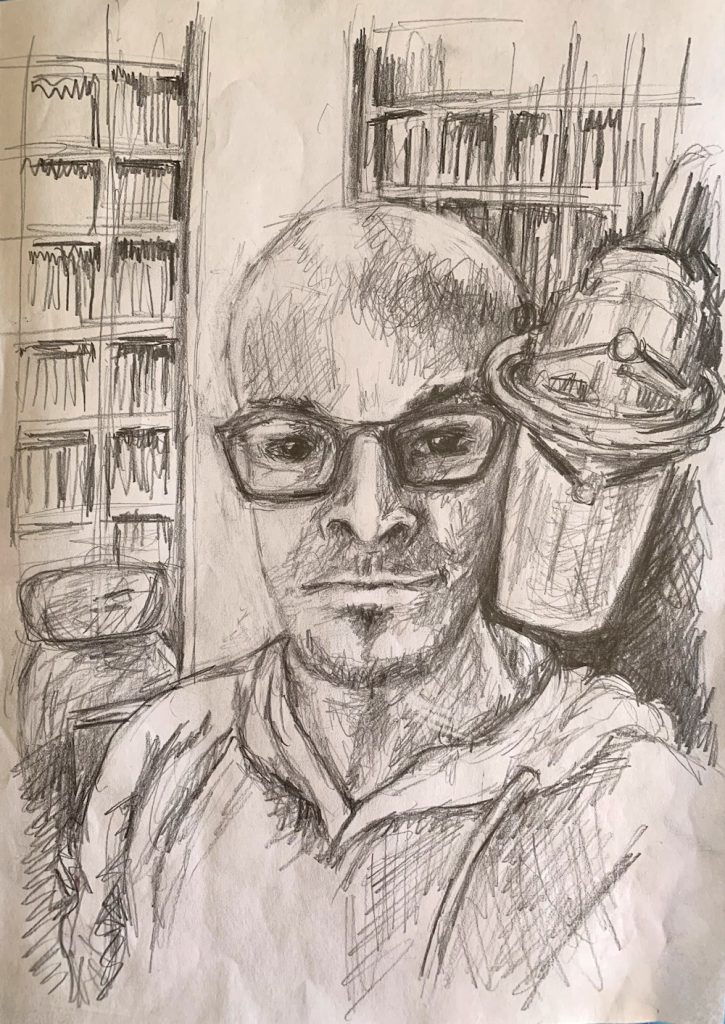 Portrait of Russell, Choir director, by Jan at a rehearsal 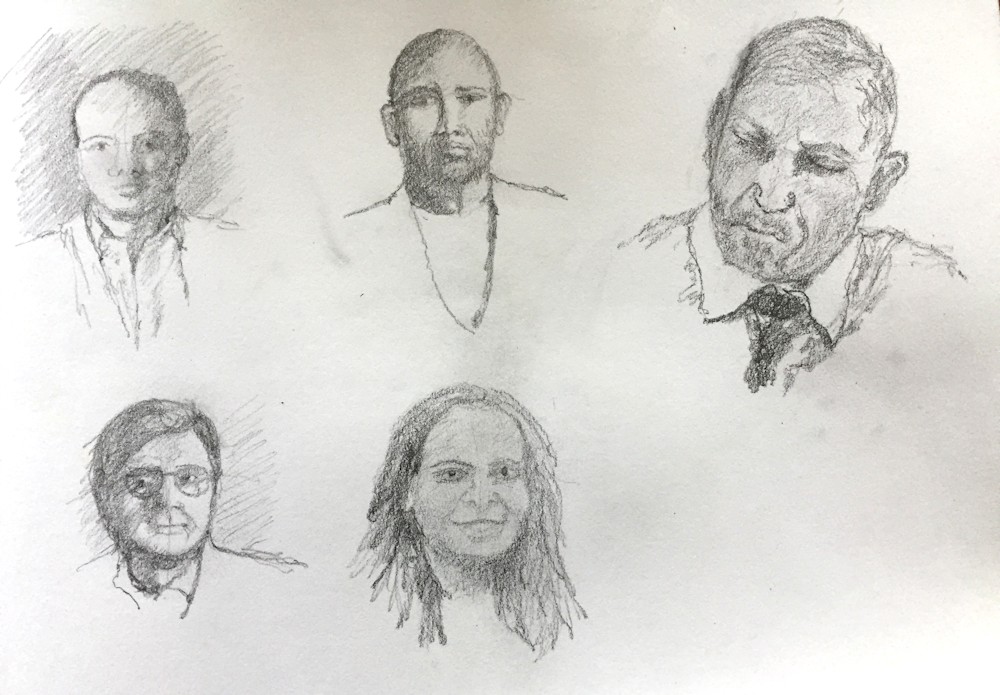 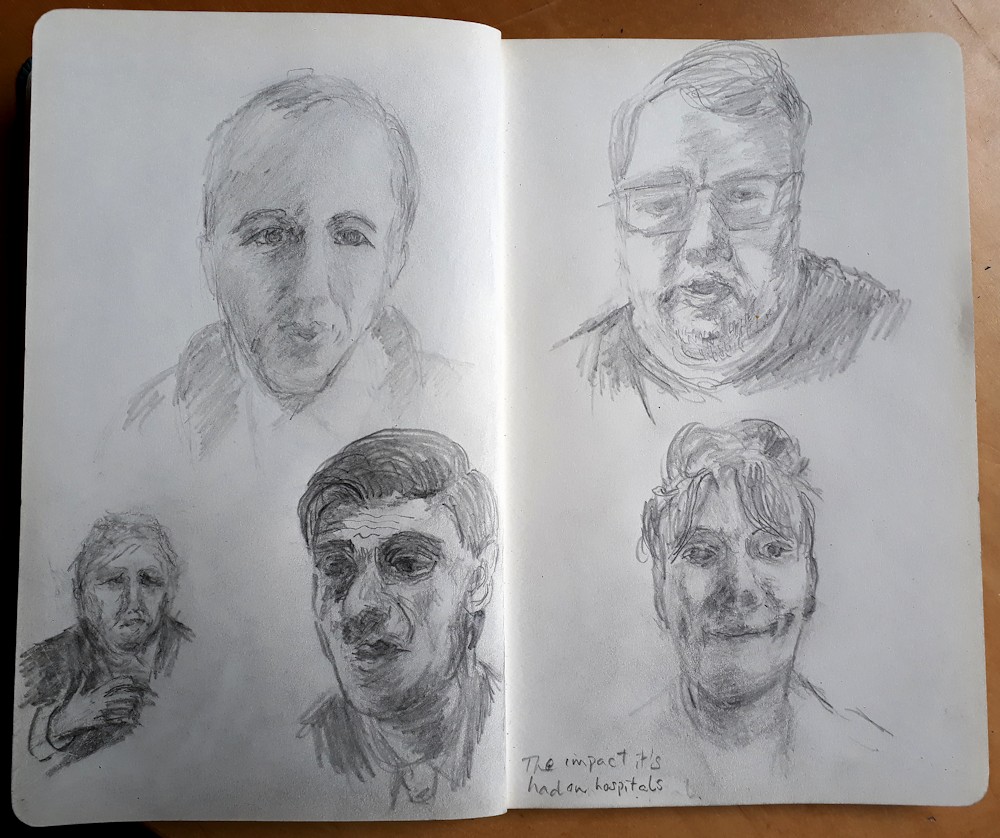 Control the Virus: Vivienne’s sketchbook studies from the news 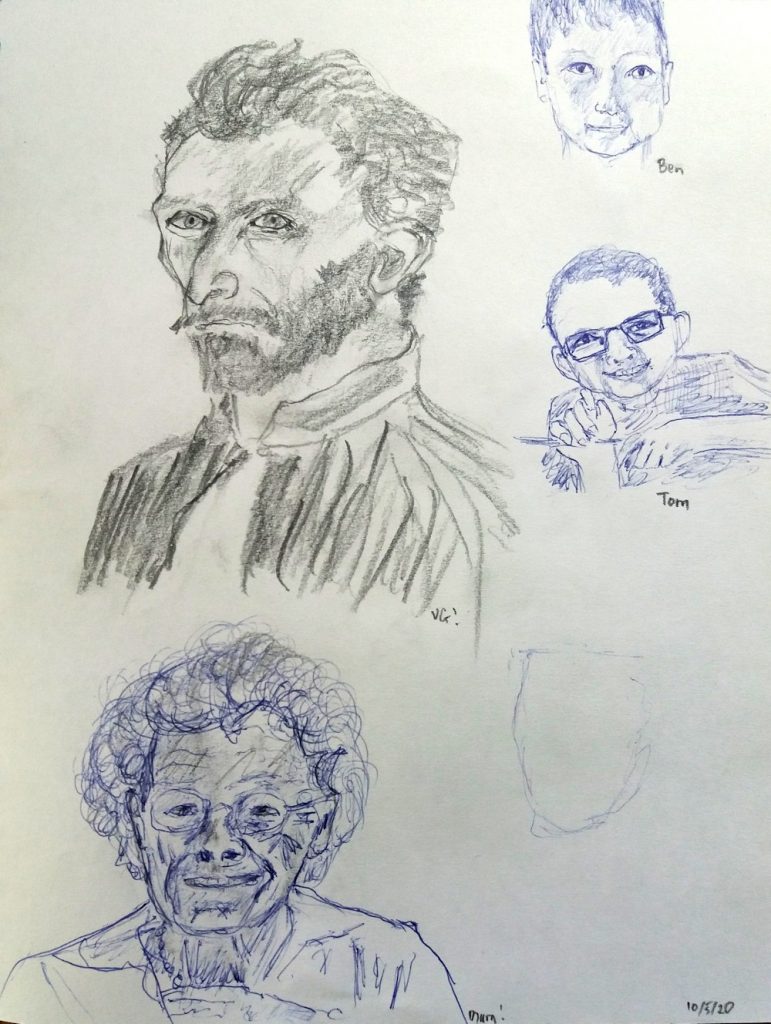 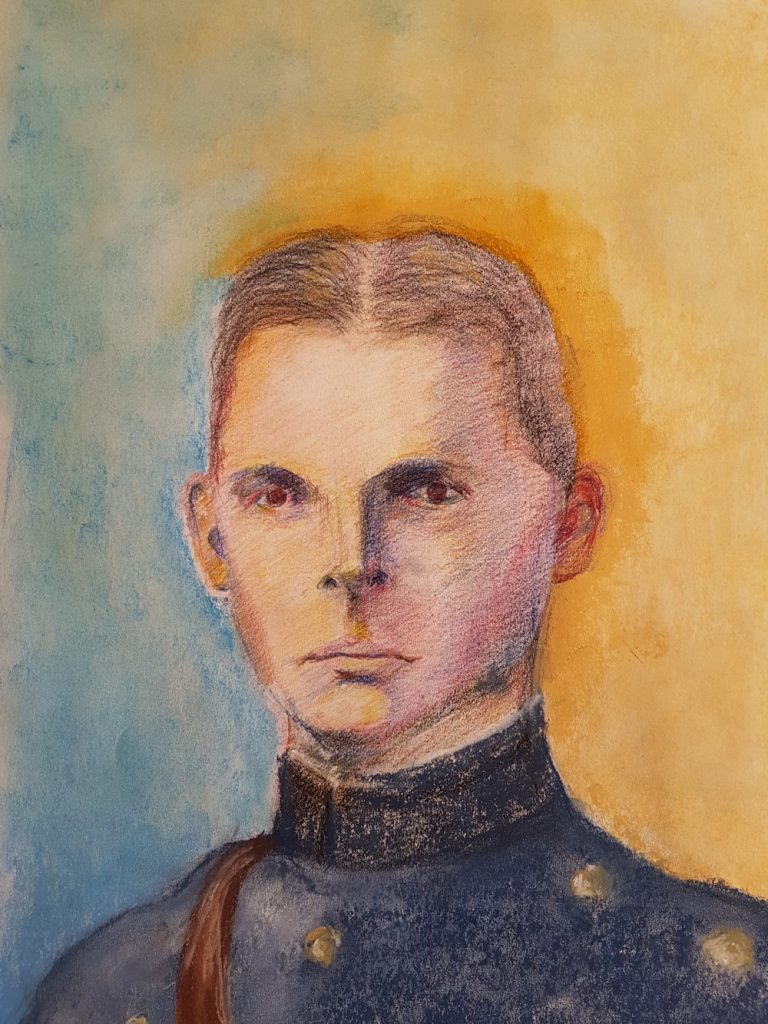 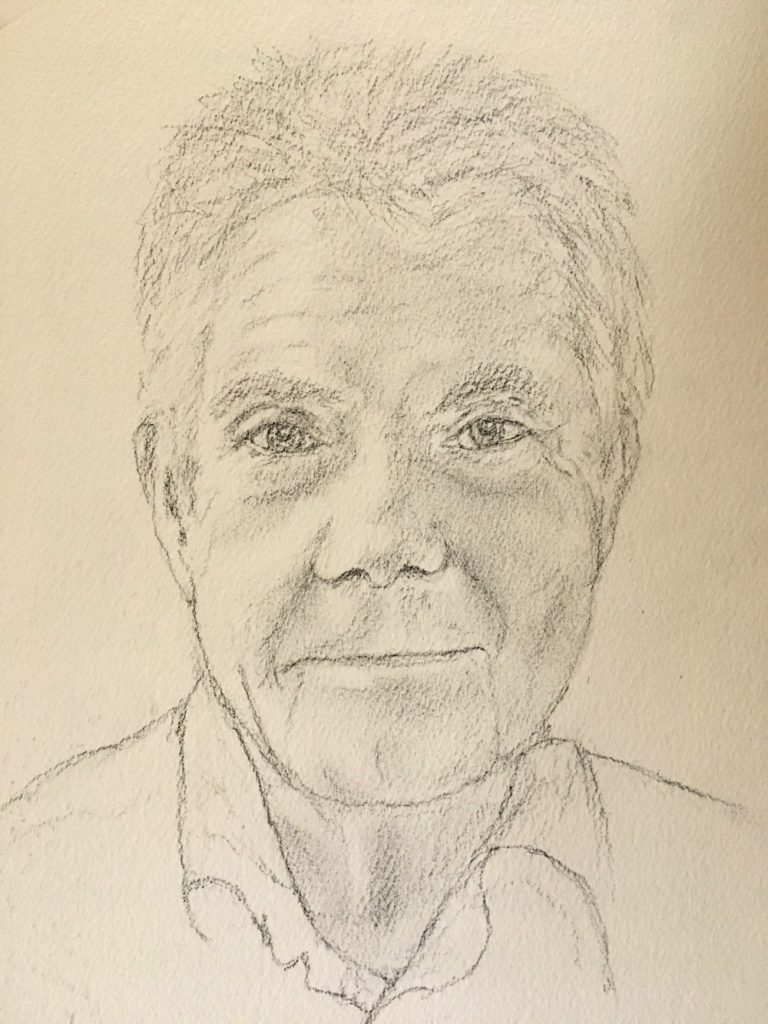 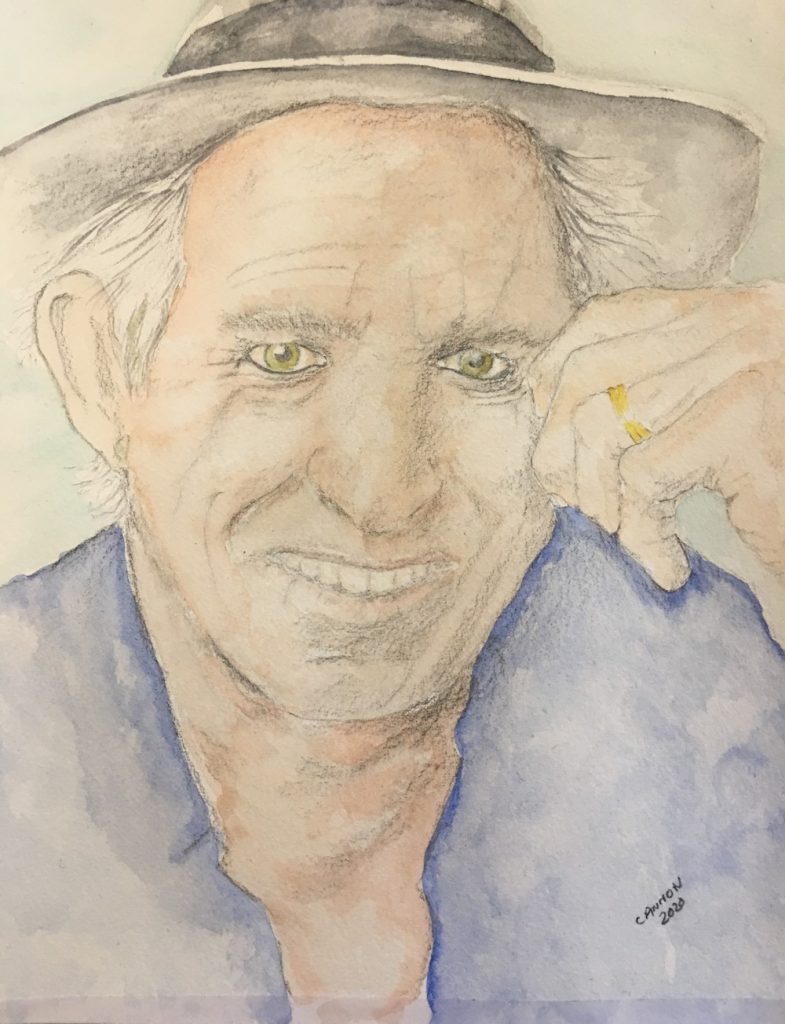 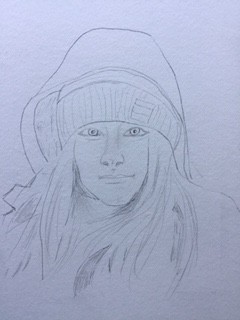 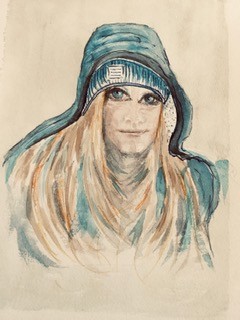 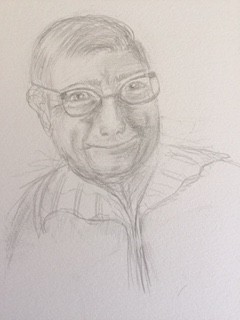 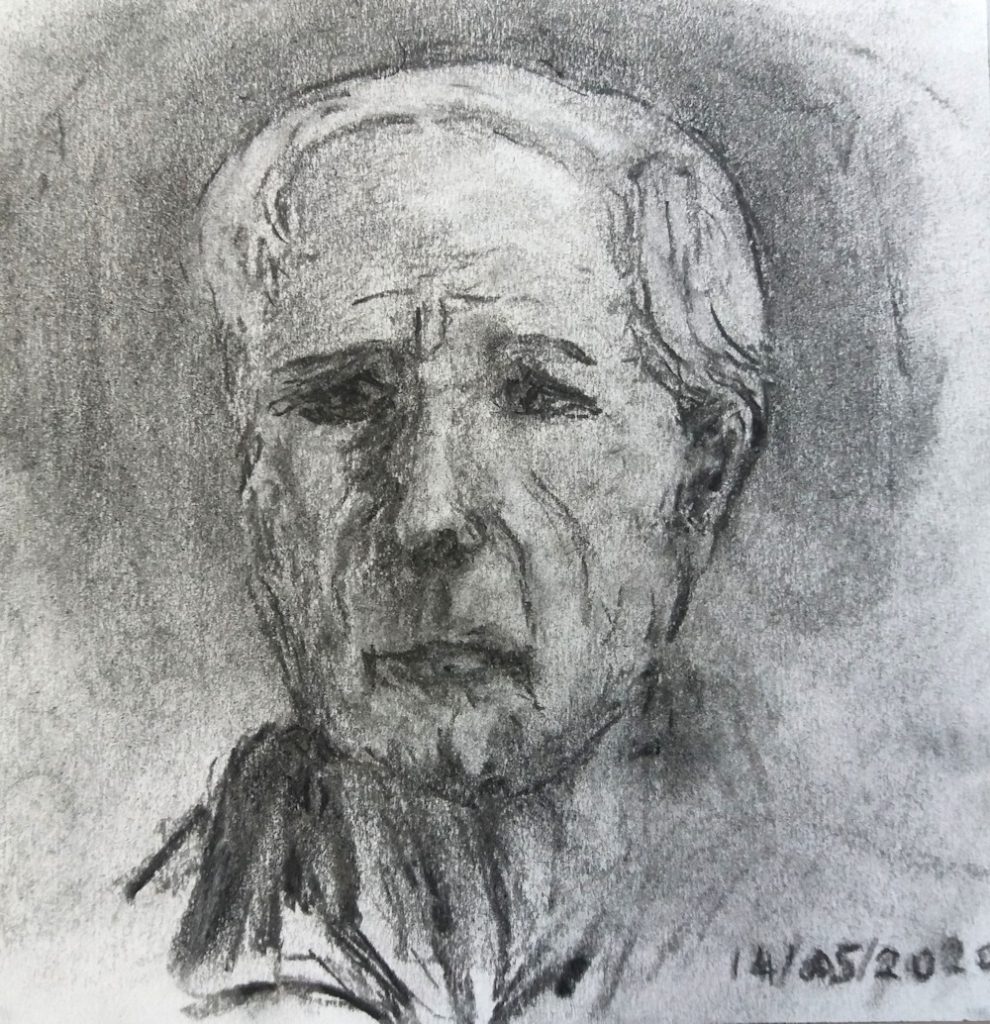 Roger by Vivienne; from life 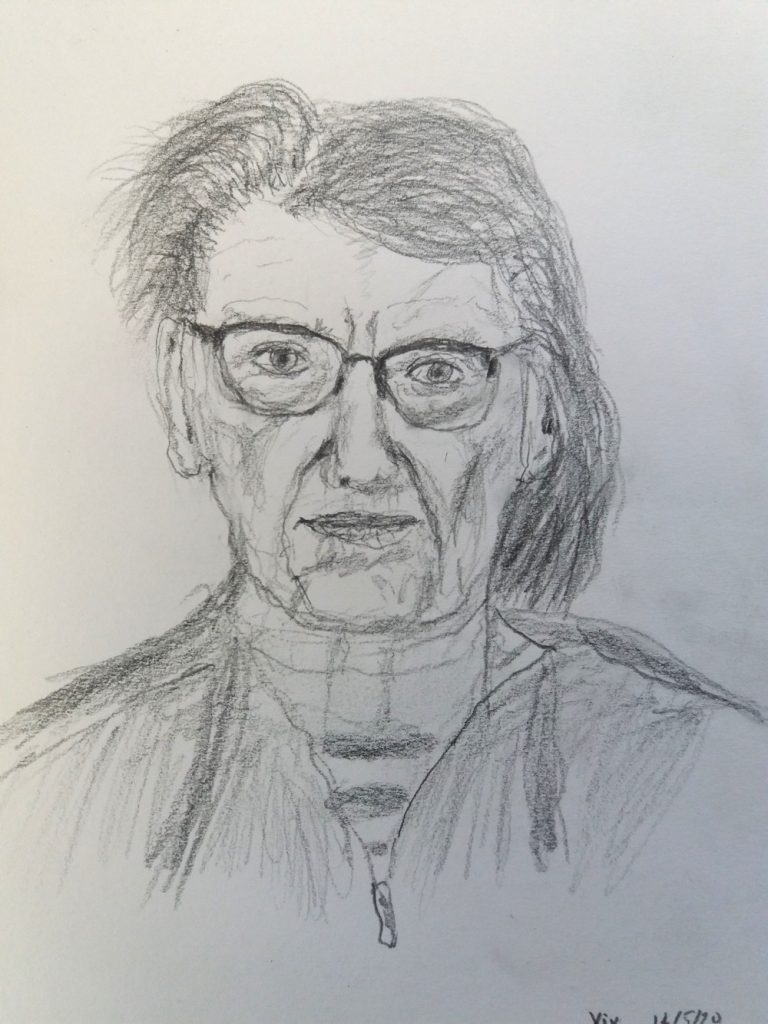 Vivienne: by Roger from life 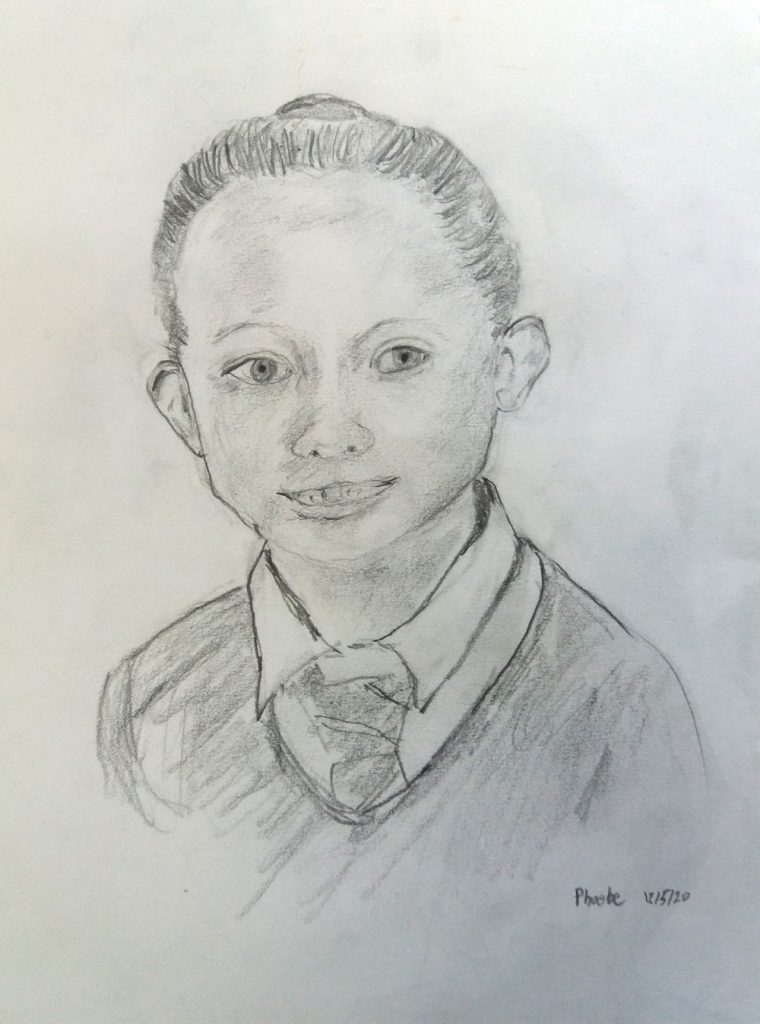 Drawings from life and reference by Barbara

Into the Garden: Watercolour and coloured pencil
Wednesdays 12th May to 16th June