A visit to Beyond Eldorado, an exhibition of ancient Colombian Gold artifacts at the British Museum in 2014 still stirs my imagination.  From tiny figurines to spectacular breast and nose ornaments, the range of decorative, animal and human depictions blew my mind away.  To think I only caught this show because I fled from the overcrowded Viking exhibition being held at the same time. The following is a record of sketches made at the show and other works inspired by the imagery. 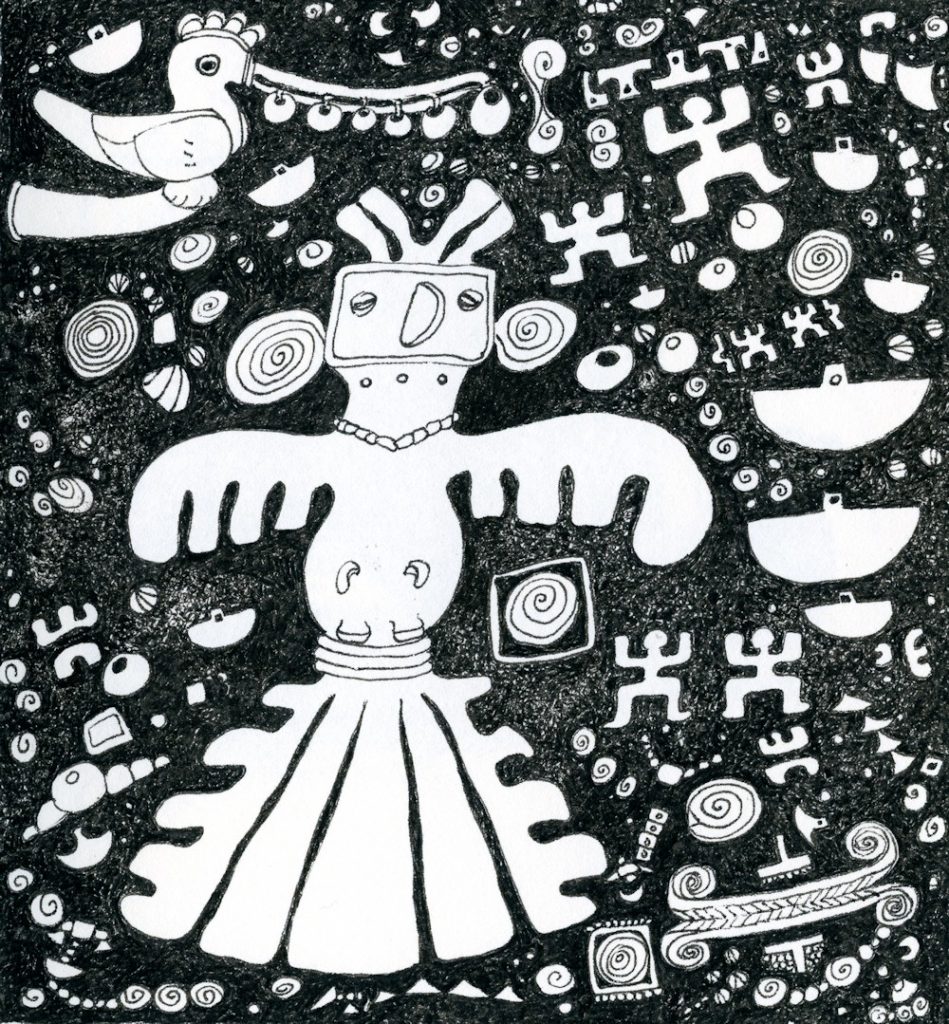 As I worked on ‘The Night Sky’, based on a staff finial in the form of a bird and a bird/man pectoral, amidst other tiny remembered shapes,  I became aware that the composition was taking on a pattern that suggested a whirling movement like the stars in the night sky, hence the title.  To accentuate this, instead of blocking with solid black ink between the shapes I decided to rather painstakingly fill the gaps with scribble leaving pin pricks of white everywhere.  This is perhaps not so out of context as so much of the imagery is about transformation and belief in out of body experiences, of humans hovering above the world and communicating with spirits (often induced by taking tobacco, Coca or Yopo). 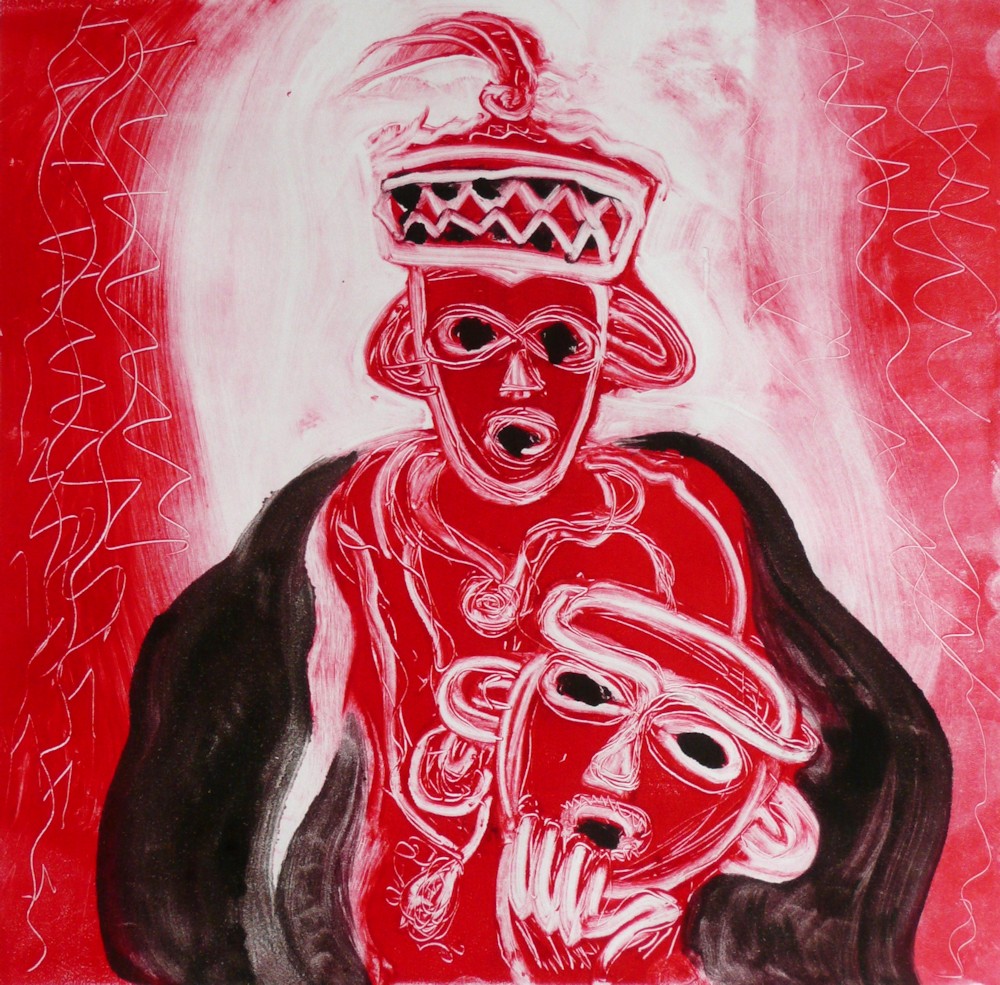 I Give you my Spirit: monoprint 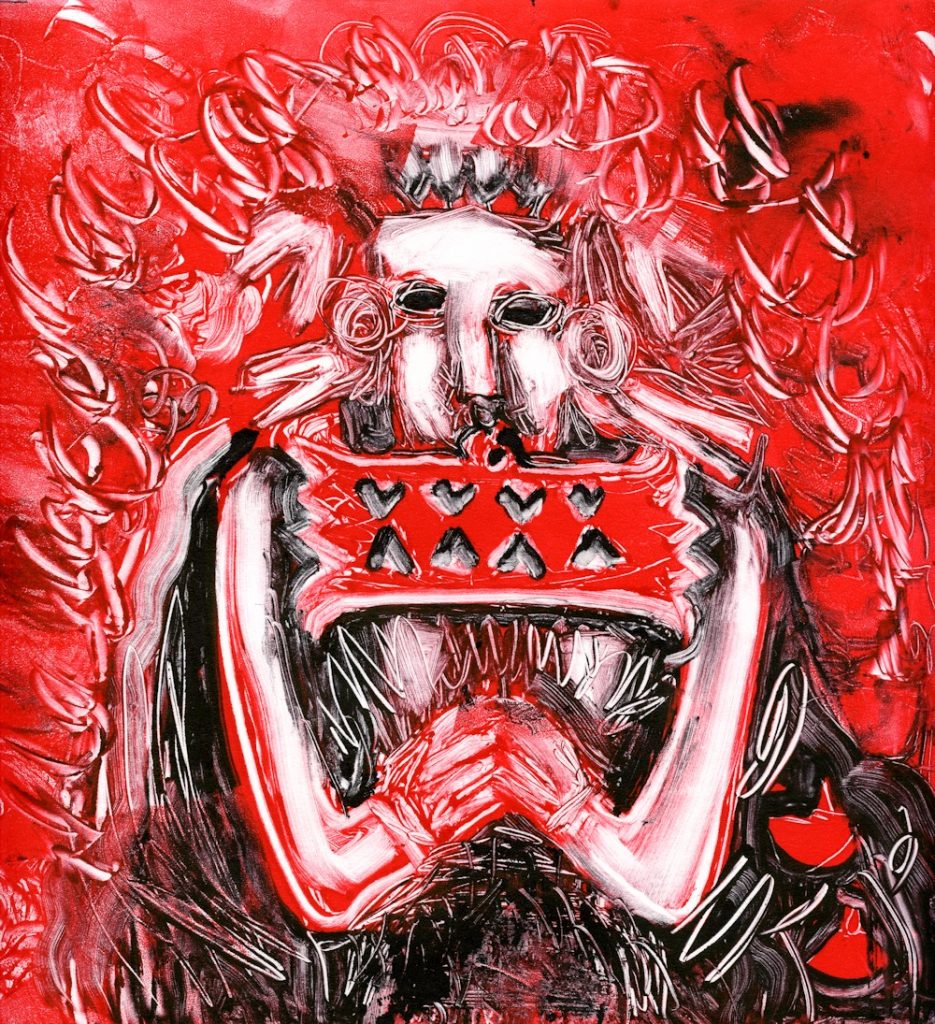 I was fascinated by some of the tiny figurines, the tunjos, which represent all kinds of people and activities.  They were buried at significant  landscape sites to communicate with the spirit world so that a balance in the natural world would be maintained.   I imagined at first glance that one with a head hanging from his arm was presenting a depiction of a trophy of war.  Another figurine and reading the catalogue text enlightened me.  Far from a bloody trophy the figure had let his mask fall from his face revealing his true identity.  It begs the question who does the mask signify?  Hence the title of my monoprint “I give you my Spirit”. 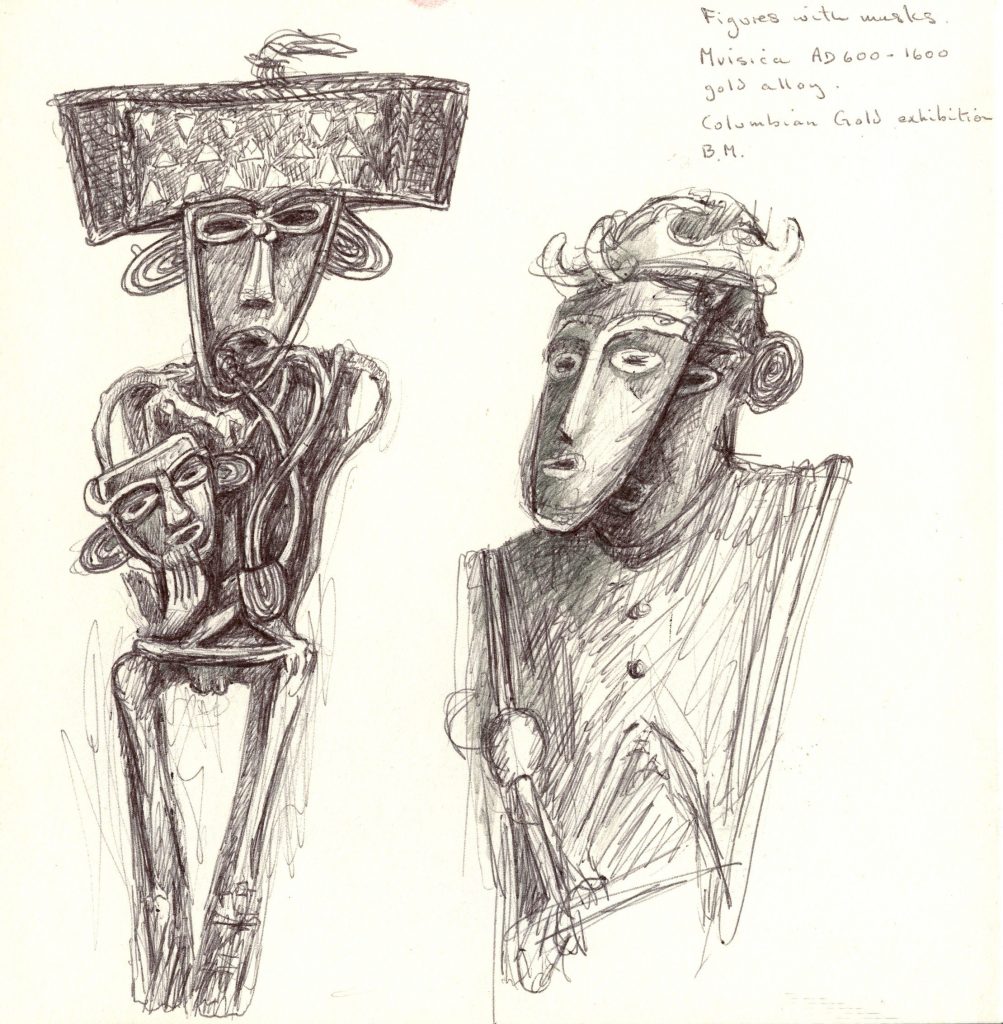 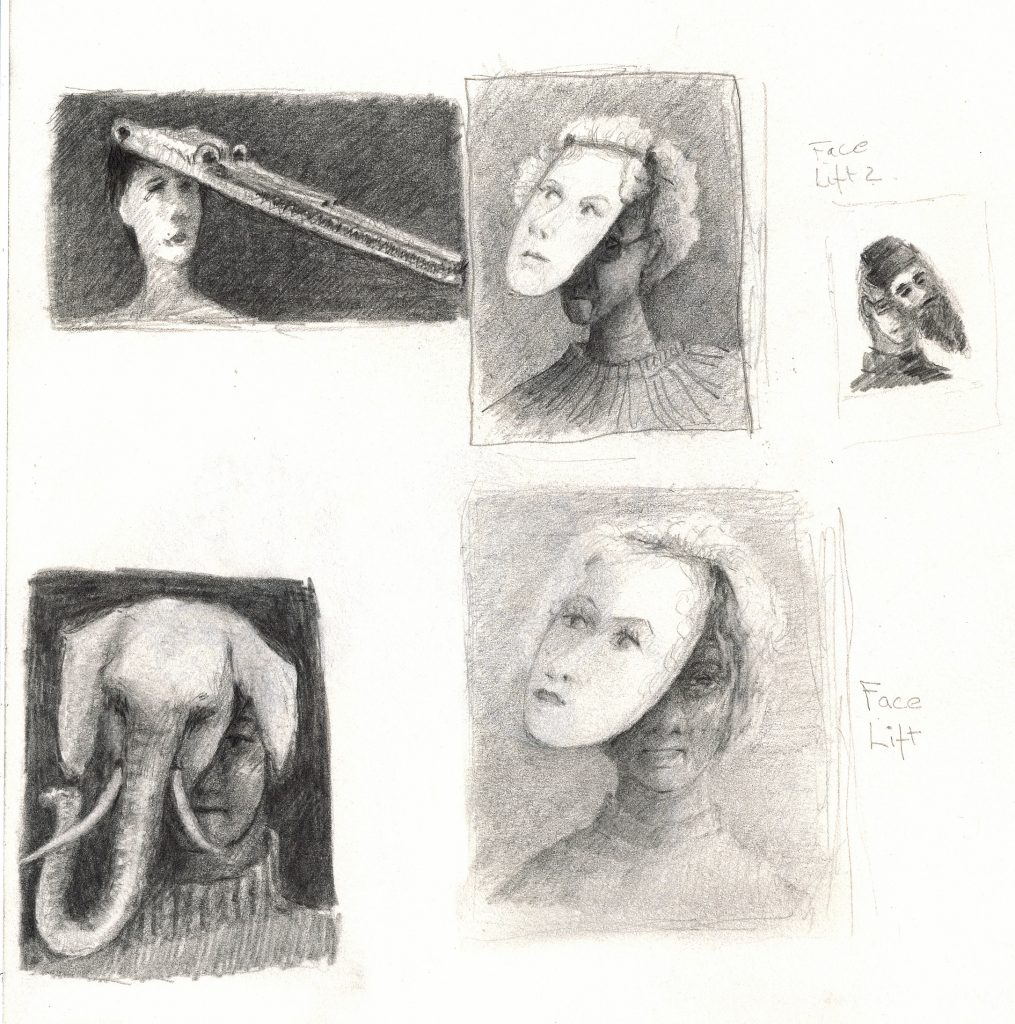 One tunjo had a mask which hinged from his forehead to show his true self which inspired the tiny drawings in my sketchbook that I hope to use in a couple of more considered works.  Another had a shrunken head swinging from his belt and in this case did signify a trophy of war! 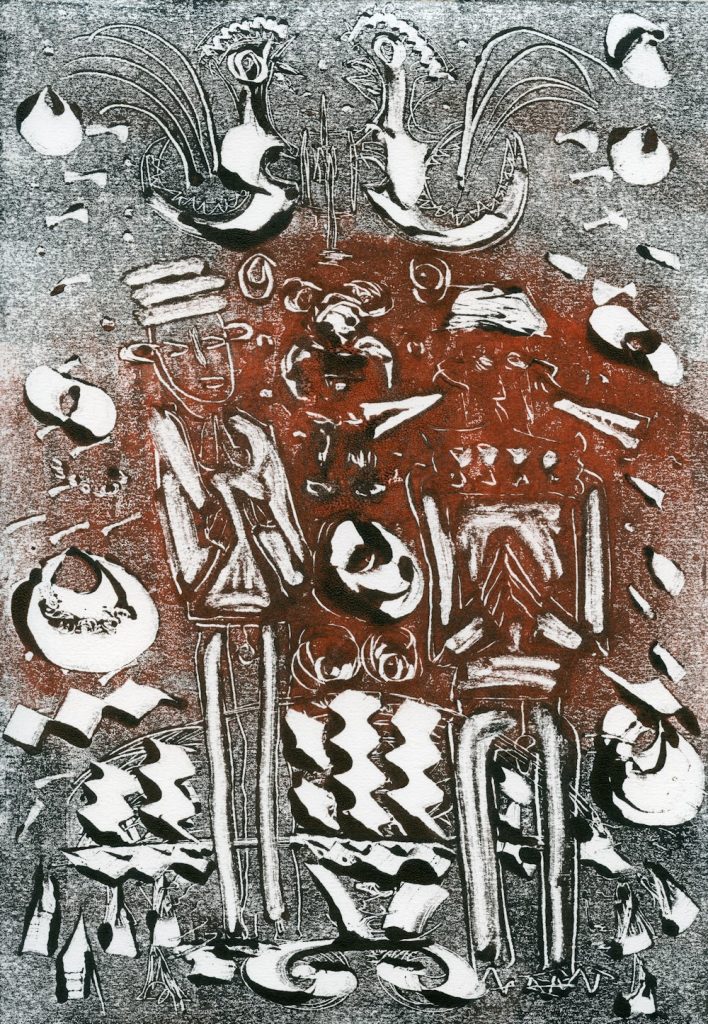 Symmetry seemed unimportant in the design of the tunjos, nor were their surfaces beautifully finished.  Their importance lay in their imagery.  Many other artefacts are hugely symmetrical especially the nose ornaments and pectorals.  Because of this I chose to make a collagraph of a Bird shaped staff finial with an image that was shown as seen, and flipped horizontally as in ‘The Star Makers’  that heads this post.

I was not altogether satisfied with the print so worked into it with watercolour and gouache.  Further mixed media  experiments  included making  prints from frottages of the plate using watersoluble ink sticks and watercolour pastels.

The frottages were printed on to damp tissue paper or printing papers and the images were developed further with watercolour washes.  Each print/painting told a different story as the little birds maintained their form but their colours, textures and surroundings were transformed.

This again echoed the ancient beliefs so strongly held among the cultures of the Colombian region and Mexico.  I had sheer joy in making these images and exploring the art of transformation but without hallucinatory drugs!  This may be why I failed to find myself skimming the earth’s surface with the power of a bird in flight.  I could however imagine the tinkling sounds of the little golden disks attached by rings to the bird’s beak, and how they might flash in the dark, reflecting the light of fire.